It’s hay fever season... and this is an event we’re not celebrating. If you have to deal with hayfever allergies, you’ll know all about the sneezing, wheezing and streaming eyes that can come with this otherwise glorious time of year – and you’re probably not a fan, either.

Not sure when your symptoms are going to strike? It’s not easy to track, but it’s usually spring and summer. If you’re one of the unlucky few, you might have hay fever all year round (and you’ll have our sympathies, too).

We’re here to help you put away the tissues and breathe freely. We’ve put together a handy guide of the different types of pollen, plus a pollen calendar to help you pinpoint what you could be allergic to. Ready? First, a rundown...

Hay fever in the UK

Hay fever is one of the most common allergies in the UK, with more than 10 million people dealing with it. At least it’s good to know you’re not alone, right? There are two types of hay fever:

If you suffer during the usual hay fever season – ranging from March to September – you could be allergic to fungal spores or pollen from trees, grass or weeds. The symptoms are the same for all of these allergies, but you might only get some of them.

If you don’t know exactly which type of pollen or fungal spores you’re allergic to, you might be able to figure it out by tracking what time of year you get symptoms. The pollen season is different for various trees, grasses and weeds. Check out these common types of pollen species you might be allergic to – and we’ll get into these shortly.

When is hay fever season in the UK?

Good question… well, the common hay fever season starts around March and lasts all the way into September, but you might even have winter hay fever. Pollen and spores from trees, grass, plants and fungi are each concentrated at different times of the year and even in different areas of the UK. That’s why the pollen season lasts for such a long time – and there’s a few different pollen seasons, too.

The hay fever season kicks off with tree pollen. This usually starts around late March and carries on until mid-May. If you get hay fever in March, there’s a good chance you could be allergic to this type of pollen, although it generally only affects 25% of people who suffer from hay fever.

This is the big one: most people who suffer from hay fever will have an allergic reaction to grass pollen. This pollen season has two peaks (where it’s at its highest pollen count, basically) and lasts from mid-May until July, but it really depends on the weather during spring and early summer. The first peak usually starts in the first two weeks of June. The second peak isn’t as bad as the first and happens during the first two weeks of July. After that, the pollen count starts to taper off.

If you find you’ve not experienced hay fever symptoms during these peaks, that doesn’t mean you’re not allergic, sadly. It might just mean that the effects of the pollen are masked by how wet, dry, warm or cold it is.

Weed pollen can be released at any time of year, but the typical weed pollen season is from the end of June to September. So, if you often get winter hay fever, there’s a chance you could be allergic to weed pollen – but your symptoms can also be caused by house allergens, like dust mites, so it can be tricky to figure out.

Here’s the pollen calendar you’ve been waiting for – the key to knowing what might be affecting you, and when. The hay fever season can last for most of the year, as we say, but knowing which specific pollen counts are high during each month could help you to pinpoint your allergy. We’re breaking them down here, month by month. 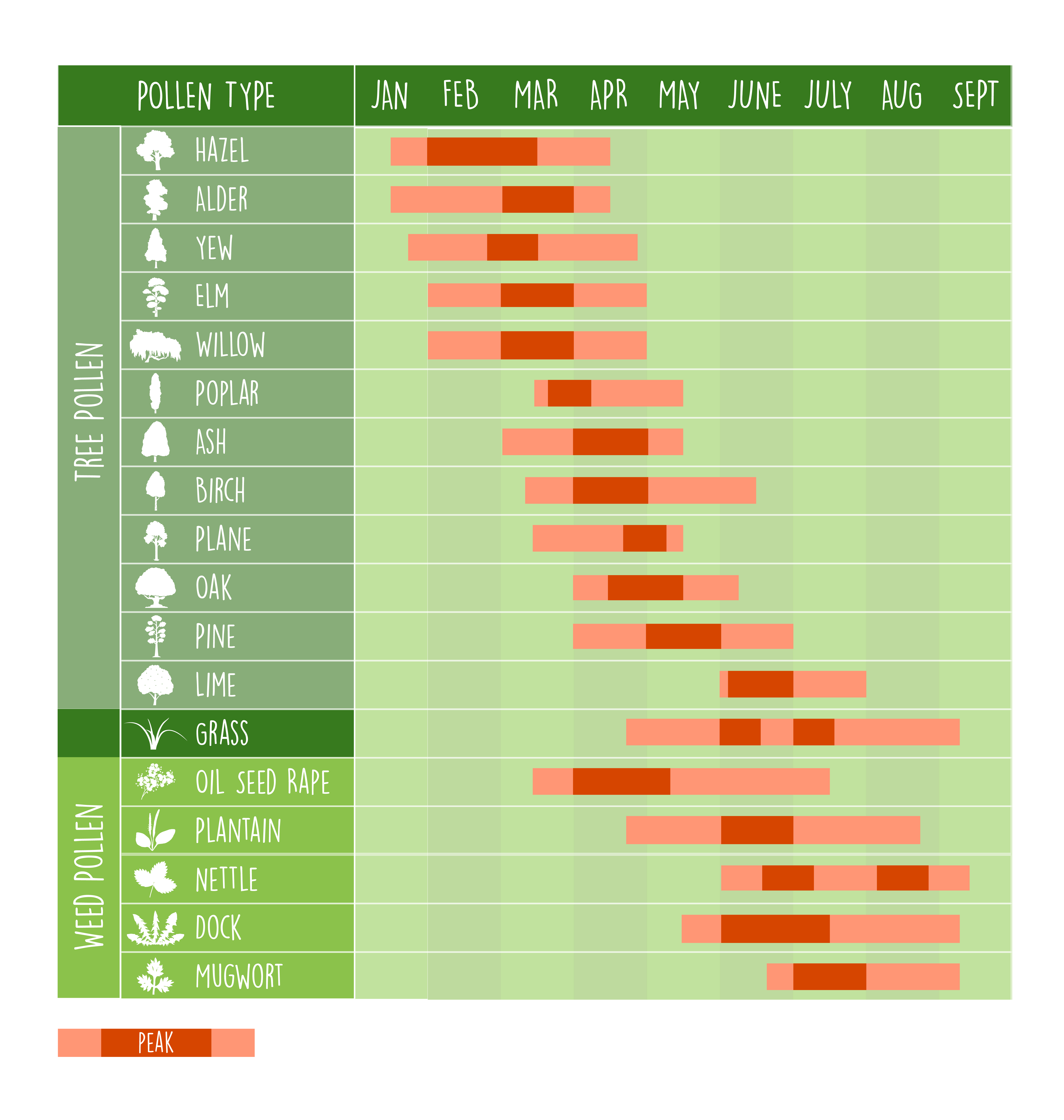 Hay fever in May

Even though none of the major tree, weed and grass pollen seasons start in July, there are a few that either peak in July or are still around during this time of year. You’ll want to watch out for: Mugwort, Nettle, Dock, Plantain, Grass and Lime.

By August, the typical hay fever season is starting to wind down, but your hay fever could still be triggered by fungal spores. Besides these, there will still be pollen in the air from Grass, Nettle, Dock and Mugwort.

September is generally seen to be the end of the pollen season, but you may still get hay fever symptoms caused by fungal spores. After that, hopefully you can breathe a bit easier.

We've broken down the most common types of pollen that you'll see in each region, all over the UK, and when. So you know that when you start sneezing in Scotland, it's not for the same reason as in the South East.

Bonny Scotland is known for its wind-whipped moors and mysterious locks – and all that countryside is going to give you some pollen. Here you'll find that Grass and Nettle are pretty common pollen types for most of the year, while Alder, Ash, Birch and Oak pop up for a few months at a time.

Northern Ireland has a few less pollen types to deal with, but hay fever sufferers are still having to deal with Grass and Nettle pollen for most of the year. In fact, there's only a few months sigh of relief from those from the beginning of the year to March – during which Alder, Ash and Birch pollen start picking up, before Oak joins in too. At least in January, you can breathe easy.

Common pollen types and hay fever in the North East

Newcastle on Tyne is feeling fine – well, for a couple of months. In January and February, the North East of England is fairly pollen-free, but Ash, Birch and Oak pollen starts to pick up from March and last until June. Grass and Nettle pollen has its season from April to September.

Common pollen types and hay fever in the North West

Manchester and Liverpool don't just have thriving creative scenes. They've also got thriving pollen counts, too. Here you'll find Hazel, Alder, Ash, Birch, and Oak, alongside the classic Grass and Nettle pollens. There's no real respite – all year round, you might be sneezing from something.

Oh – what's occurin', Wales? Not much sneezing and wheezing, apparently. Considering just how idyllic Wales' countryside and coastal regions are, wrapped in grass and sand, there aren't as many pollen types as you might think. Here you'll find Ash, Birch and Oak from March to June, with Grass and Nettle joining from April to September. Tidy.

Common pollen types and hay fever in the East Midlands

Planning on visiting the Nottingham forest with your own Merry Men? You're sure to have a lovely time –but we pretty much can't guarantee you won't be sneezing in any month. From January to September, there's always something: Hazel, Alder, Ash, Birch, Plane, Oak, Grass and Nettle take turns throughout the seasons, and sometimes overlap. Stock up on tablets and tissues, just in case.

Whether you're boosting your education with a trip to Cambridge University or heading on a well-deserved night out in Essex, the East of England has a little something for everyone. That's true for pollen, too: with Ash, Birch, Plane, Oak, Grass and Nettle appearing from March to September. January and February are free and clear, though.

The South Central region is where all the 'shires' are: Buckinghamshire, Oxfordshire, Berkshire, Northamptonshire... the list feels endless. But luckily the pollen types are not, with only Ash, Birch, Oak, Grass and Nettle making an appearance throughout the year. As per usual, Grass and Nettle are there for a while – from March to September – but the rest are just a few months at a time, from about March to June.

From the iconic streets of London to the stunning views of Surrey and beachy waves of Sussex, the South East is a region of true range. So it makes sense that you'd get a range of pollen types, too. You'll find Ash, Birch, Plane and Oak from March to June, here (but it's worth pointing out, you'll probably get more of this on the South Downs than you will shopping in Shoreditch). Grass and Nettle, our favourite friends, will be with you from March to September.

Devon, Cornwall.. where the sun shines, the pollen rises (okay, it's not really that extreme). Don't let that put you off. Head to the beautiful beaches of the South West – and the gorgeous countryside too, lest we forget – and just be aware that year-round, there might be something that sets off your sneezing. You'll find Hazel, Alder, Ash, Birch and Oak here at various points from January to June, with the usual Grass and Nettle picking up from April to September.

Got it? Now that you’re up-to-date on hay fever seasons, you’ll be able to stop symptoms before they start. No need to thank us – we’re just glad to help.

If the pollen season has caught you out, browse our range of allergy and hay fever relief tablets, sprays and more. Order them today for delivery tomorrow – that’s hay fever season sorted.